Today I’m weighing up the pros and cons of the Nook’s and the Kindle’s so you can make the right choice when deciding which device is best for you for long term reading. I’ll be primarily focusing on features from the Nook Glowlight Plus but generally the majority of the comparisons here apply to most Nook devices.

The Nook’s are about the same size as the Kindle’s with the exception of the Kindle Oasis which is about half an inch smaller. The benefit of this is that it enables easy one handed reading. 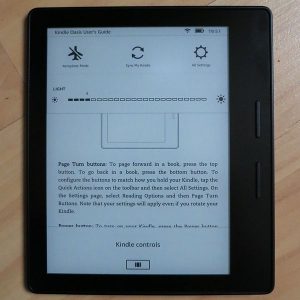 There are some key differences here when it comes to comparing the User Interfaces. The Nook has taken the approach of being a little more visual when it comes to displaying the EBook covers on various UI screens, whereas Amazon tends to reserve this just for the Home screen.

Also the Nooks do have a recommended reading section on the home screen which allows you to view excerpts from books and then store these on a wishlist which is then available in the store.

If you’re planning on having a lot of EBooks stored on the device, Nook devices can be a little clunky in terms of having to scroll through books to find the one you want. With that said, this can be easily overcome by the search functionality.

Overall on the UI I have to say that my personal preference is Amazon’s interface as they seemed have taken the most common features a user may need and make them easily accessible.

At the time of writing, The Nook Glowlight Plus was a little cheaper than the majority of Kindle’s out there. The exception being the Kindle Paperwhite. For those of you wanting to splash the cash, there is the Kindle Oasis which is the lightest device of on the market but also one of the most expensive.

Formats it can read

Stark contrast here as this reflects the online stores from which you can purchase EBooks from. The Nooks can can read formats such as PDF, ePub texts and JPG, PNG, GIF and BMP graphics whereas as Kindle devices tend to read the Amazon Ebook format (AZW), MOBI, PRC, TXT as well as PDF files

You can read both Amazon and Nook devices in the dark due to their brightness technology. Nooks call this out specifically as Glo light technology but in reality it’s just the screen being bright at night without intervention.

Both types of devices also allow you to store your books online and allow you to read them on multiple devices (mobiles, tablets etc). Also both Nook’s and Amazon Kindle’s have the highest resolution possible for your reading experience.

The Nook devices tend to be waterproof and dustproof which is a route Amazon has not chosen to go down. If you’re worried about spilling your drink

on the device whilst lounging around the pool on holiday, this might be something worth considering.

On some Amazon devices, they have opted to use Pagepress technology which means you can press the sides of the device to turn the pages back and forth. This is demonstrated on the Kindle Voyage. In contrast, Nook’s have opted for the traditional touch sensitive mode of page navigation.

The Nook’s also encourage sharing your reads with others with their LendMe service. This allows you to lend books to your friend and family who are also on Nooks. No such service exists on Amazon. Amazon’s alternative to this to provide a service called Overdrive which allows you to borrow books from your local library. Depending on how many Nook friends you have will determine which service is right for you.

Amazon devices all encourage your kids to read by letting you set up reading challenges for you little ones. This can encourage them to get onboard with reading in a digital age. Unfortunately no such service exists for the Nooks

So there you have it. Do the Nook’s stand a chance the Mighty Amazon Kindle’s. They certainly have a chance through their diversification. If you’re needing your device to be waterproof and dustproof, it’s worth giving Nook’s some serious consideration. For those of you who want to learn more about Nook’s you can read my in depth review of the Nook Glowlight Plus here

I’m interested in purchasing an ereader, but I travel a lot, which means I don’t have a lot of access to charging ports to charge my devices. I have a portable battery that helps, but it doesn’t last forever!

Which do you think has the greater battery life? That will be one of the most determining factors for me.

Great question. There are a lot of tweaks to make your battery last longer such as flight mode and turning off adaptive brightness on most modern Ereaders but your best bet is probably the Kindle Paperwhite.

An informative article, thank you! I’m still doubting on which one to buy. I’m quite the clumsy person so I’m thinking about getting the Nook since it’s dust and water proof. I can already see myself dropping my Kindle in the water.

But what about the speed? My previous E-reader (another brand) was really slow while navigating to different books and pages. Zooming was a no go cause it took me forever. Does the Kindle or the Nook have better performance in terms of speed?

Glad you found the article useful and hopefully I can help on your question. If I was talking about EReaders a few years ago then I would have probably recommend Kindle’s but the EReader industry as a whole has stared to recognise this as a problem and took steps to fix it. These days, there’s not much in it between both brands but worth recommending checking out a couple of YouTube videos so you can see for yourself.