Today I’m focusing on something a little different. Rather than a specific EReader, I’m taking a look at Amazon’s physical stores and how they can help you make a decision on which EReader you need.

So Why Do They Exist?

It’s a bit of an odd concept really. Amazon have already dominated the online world with EBooks and EReaders being stored in warehouses and then being shipped to customers. So why change? Well they realised that customers sometimes really just want to hold the thing first before they commit to that final purchase decision.

The interesting thing here is that they’re not rolling out hundreds of these stores and putting their entire weight behind the idea. At the time of writing there were only 14 stores and they’re based in the United States. Time will tell as to whether or not they go internationally.

So What’s Different To A Traditional Store?

So one of the key differences here is around the price of the items. In a traditional high street store, items would be priced a little higher than they’re online competitors as they need to factor in staff costs, building lease agreements etc. Not Amazon stores. The price in store is the same price online.So how do they cope with online price fluctuations? Well they don’t actually have prices on the items! It’s a bit quirky but you can either take the item to one of their barcode scanners throughout the store or download an app on your phone to tell you the price. This is fine for 1 or 2 purchases but anything more than that, could be a little clunky. However, this extra level of effort could mean you get some great bargains. 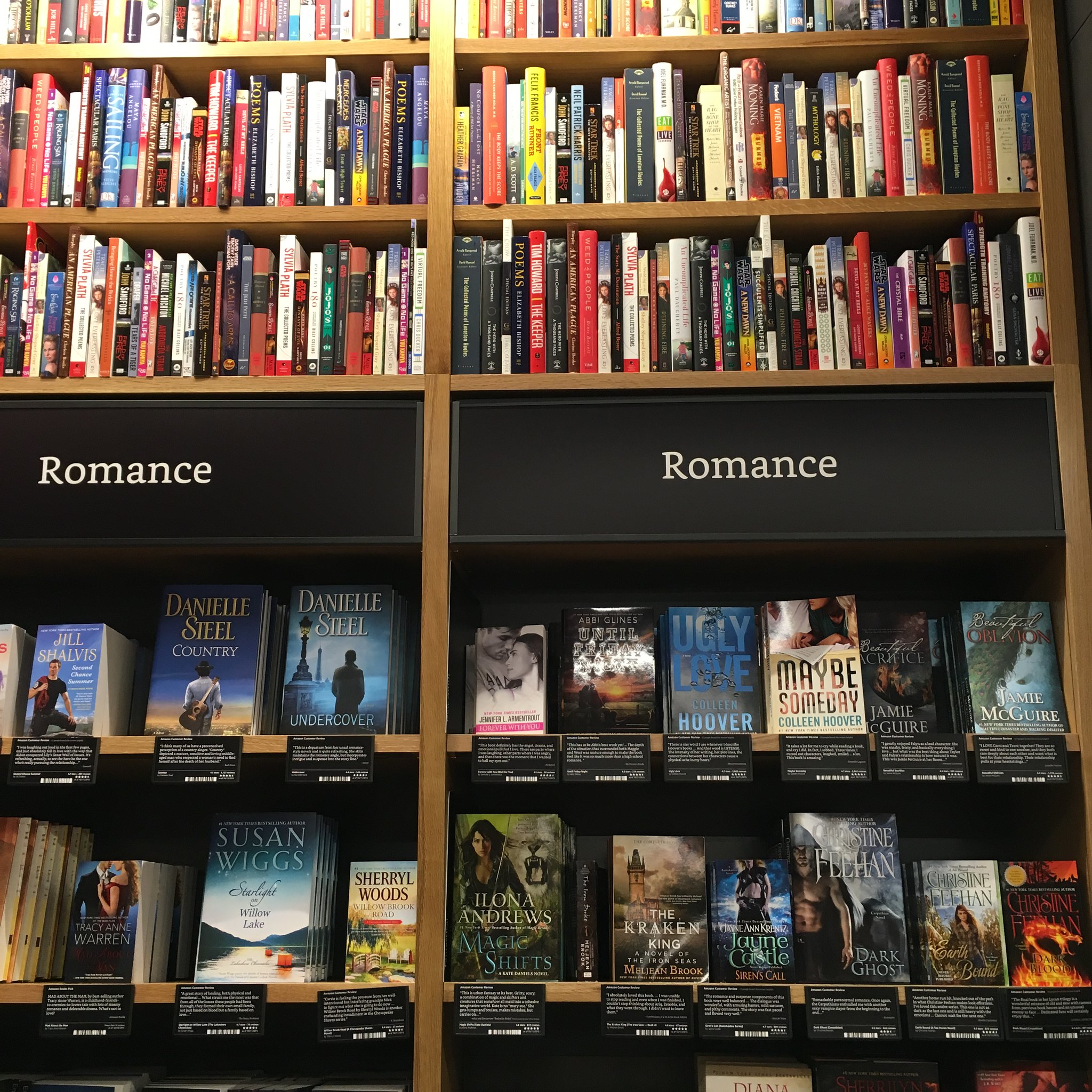 Secondly, Amazon stores have a bit more a showroom feel than your average store, where presentation is key. This is great for looking at EReaders as they have a number of display that you can have a play with to help finalize your decision. As it’s Amazon though, this does mean only Kindle’s will be in the store. No Nooks or Kobo’s I’m afraid

Another differentiator is that the Amazon physical stores don’t have everything you can purchase online. In fact they probably have about 1% of what you can purchase online. They’ve focused on stocking the top selling books and tech where you want to get a feel for it before you buy. This is fine if you’re looking for EReaders but if it’s to flick through the pages of a particular book, might be worth calling them first to make sure they have it in stock.

The final point to touch on here is the level of advertisement Amazon has made about it’s stores. They haven’t really and have actually gone for the approach of ‘saying less is more’ to drive up curiosity and interest. There’s no large banner ads on their site redirecting you to their nearest store or mass media publications when another store gets opened. Even to find the list of stores available I had to use a combination of Wikipedia and YouTube videos just to get their address. I guess Amazon are taking the ‘wait and see’ approach before making a big fanfare around these stores.

So How Do The Bookstores Look 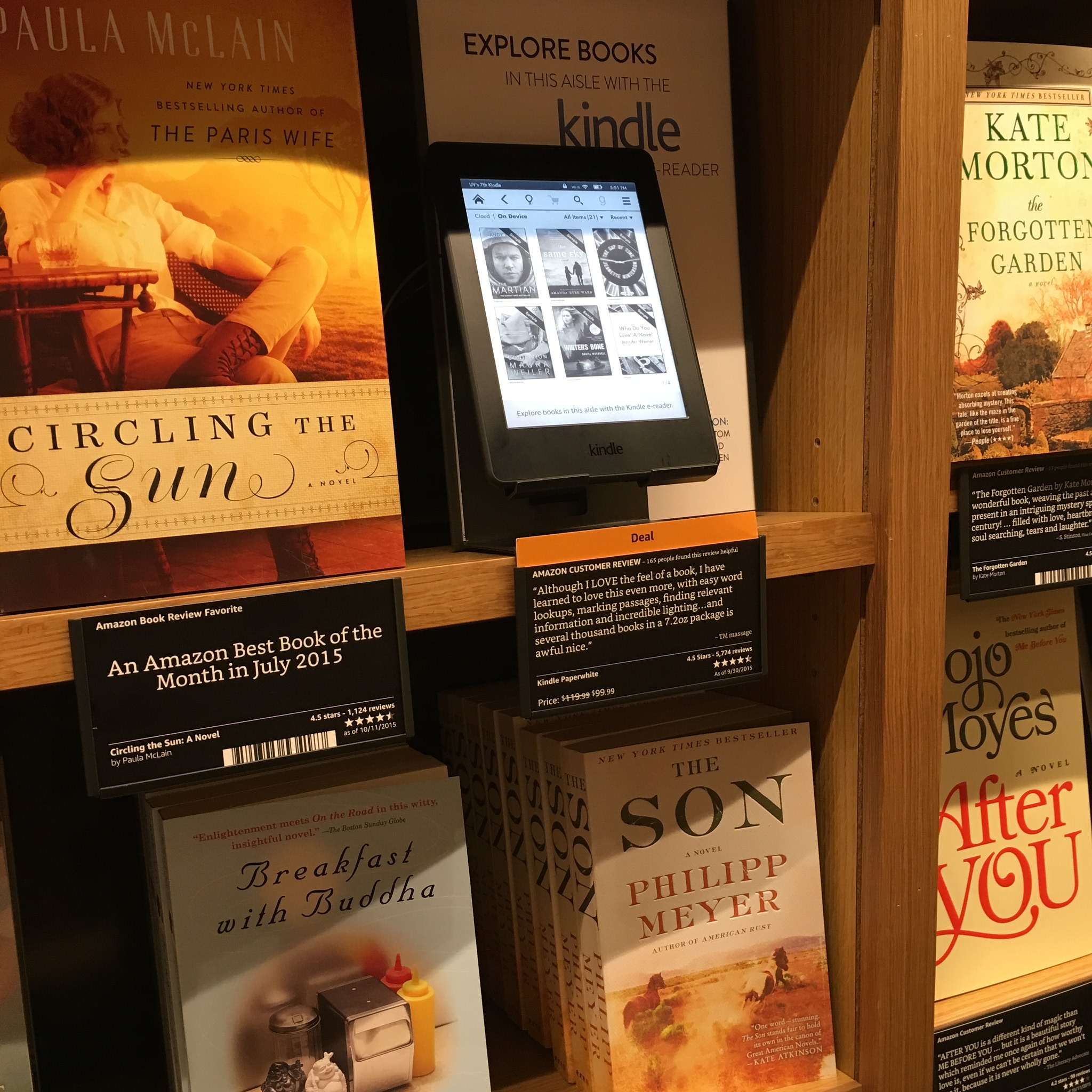 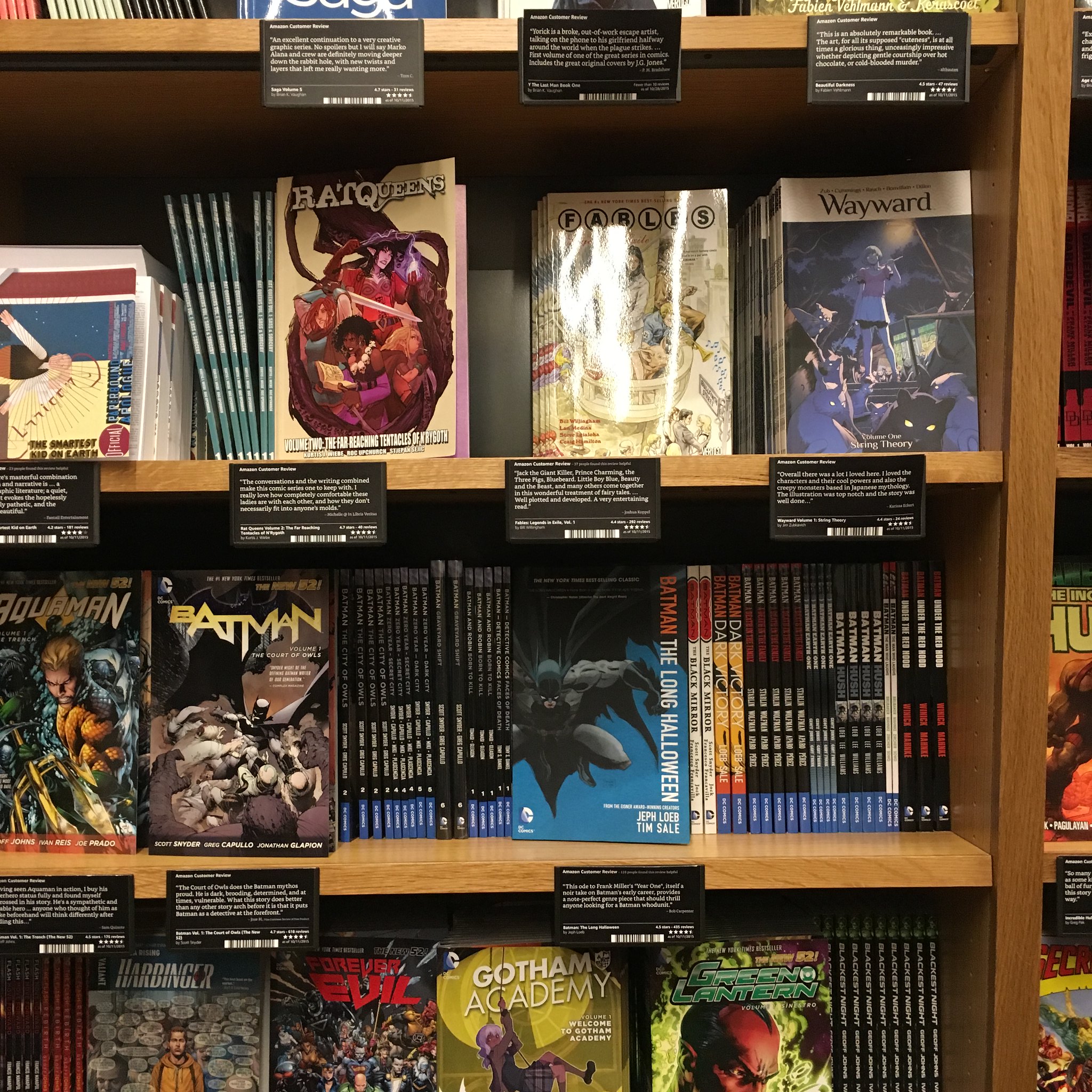 This short video by Bloomberg gives you a brief overview of how they look inside:

Where Are The Stores?

So if you’re living in the states, then you’re in luck. There are a number of stores located across the country. You can find your nearest store on the list below

So What’s The Difference Between Amazon Book Stores And Amazon Go?

Basically a massive one. With the Amazon bookstores, they only focus stocking the top sellers and gadgets such as EReaders. With Amazon Go they’re trying to stock a range of everything. Also with Amazon Go there are no checkouts! You enter the store with your signed in Amazon account and when you pick something up it’s added to your Amazon cart. When you walk out the store, you receive your payment confirmation. Weird right?

So there you have it. A list of Amazon bookstores where you can try before you buy. I’d definitely recommend trying one out if you’re in the local area, even if it’s just for the novelty value.

Thanks for the great info. I didn’t even know Amazon had stores dedicated to books and readers. As I was reading the first question that popped into my head was “where can I find one?” So thank you for providing a list! Sadly Walnut Creek is the closest to me and that’s about 1.5 hours away so I’ll have to plan the trip. Rest assured I’ll check it out soon.

Thanks for your comment and I was pretty shocked too that they existed. I happened to come across a news article thinking they were brand new only to find they opened a few in secret already. Good luck with your trip and would love to hear your feedback on what you thought about the store.

I haven’t gone yet but it’s still on my list. I just didn’t want you to think I had fogotten.

Hi Scott,
No worries and let me know how it goes!

I never knew about this either. I think it’s interesting how Amazon started out as a book store, and now they’ve become one again! I’m not in the US, but should they ever open a store near where I live I’ll have to check it out, seems an interesting concept. I much prefer a paperback or hardback to a Kindle, however – even if the Kindle is so so much more convenient.

Thanks for you comment and it really is an interesting strategy that they going for (or maybe there isn’t one at all). Fair enough on the Kindle front as they’re not for everyone. If you do change you mind, you’re more than welcome to read some of my reviewers.

Very interesting. I did not know about Amazon physical stores. They are certainly keeping a low profile.
I’m not sure how well this will work for them, especially if they don’t advertise them. But, if the selection is limited to best sellers, why would I go out of my way to visit their store when the same books are available almost everywhere anyway?
Also, when I buy my Kindle books, there is always a preview available online so why do I need to visit a physical store at all?
Anyway, I wish them luck. I love my Kindle and anything that helps them keep well stocked with ebooks is good for me.

Thanks very much for your comment. It really is a strange model as there seem no clear plans for massive expansion of the stores. I guess with the store setup they have books because they have to but the real area of focus is the try before you buy on some of the tech items they have such as EReaders.

James, I did not even know that these physical amazon stores even existed. They currently do not have any in my state (Oklahoma). Do you know if there are any plans on expanding the number of stores in the near future? I would love to visit one of these if I happen to visit a city with one. They seem really cool.

Thanks for the comment and happy to share the knowledge! At this stage I don’t know if they’re planning to create more but will keep this list updated once I come across new stories. Yeah it’s a novel concept and we’ll see how it pays off with Amazon’s long term strategy.

This is great news! I had no idea Amazon offered physical book stores. I buy a lot of e-books on Amazon, but it would be so nice to spend some time working on my wish list in person! Thanks for the informative article and the list of locations!

Really glad you liked the post and hope there’s a store near you! Let me know if you need anymore info.
Cheers
James